After almost ten years, I've decided to stop updating my LJ. I don't have the time to update it properly. I only come back here for some friends with whom I don't have other contact and I've managed to maintain contact with them via email. And I'm really tired of the ugly slanderous crap people suffer from nasty little bullies with nothing better to do with their time than insult other people. They've found a hospitable climate on LJ, so I'm out of here.

I won't delete this, but it won't be updated. I am on Facebook now -- my ID is melodyclark23. I'm also available via email at melody23@gmail.com. Most of you are really great people, so I hope to keep in touch with you elsewhere.

BTW, I will be crossposting from my own blog to here. It just won't be any different than my own blog. Wherever you want to read or reply, it's up to you.

MY FAN FICTION CAN NOW BE FOUND ONLINE AT MELODYCLARK.ORG 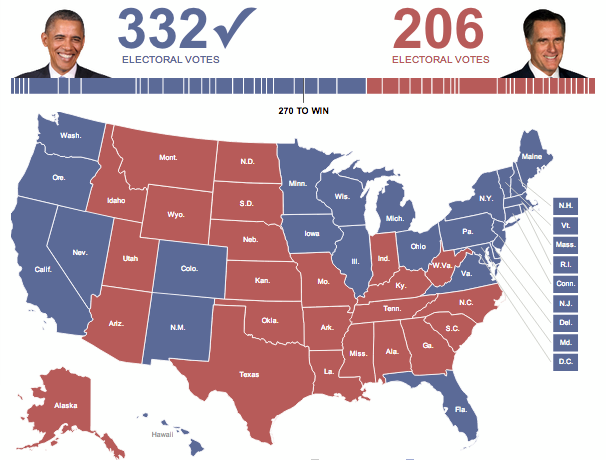 BTW, Nate Silver, Sam Wang and all the believers in science (all that statistics and math stuff that Fox News and much of the rest of the media were denying) were all 100% right. That's how I guessed what would happen. I don't listen to known biased pollsters, namely Scotty Rasmussen, the Gallup organization, and Gravis. The polls I pay attention to (and the ones that Silver and Co. give more weight) are ones that have proven methodology that aim to forecast reality, not the blue sky weather in Lidsville. lol

Alas, poor GOP. "We bear it calmly, though a ponderous woe, And still adore the hand that gives the blow." They should wake up and smell the fascism.

As soon as the west coast comes in, he'll have the electoral college votes for reelection!

The two lighter blue colors are "light Obama" and aren't in the safe count. He has a very easy road to victory.

Here's my forecast for the election:

Obama is substantially ahead in and will take:

Obama has a good chance at Florida, too. This amounts to considerably more than 270 electoral votes, which is what he needs to win. Anything else will be election theft.

I hope all my east coast friends and beyond are okay. I'm worried about all of you, so check in when you can. New Orleans is dry as a desert -- barely a cloud in the sky.

Obama will have no problem reaching 270 electoral votes, which is all he needs to win. Silver has him at 294. Other projections range to over 300. IGNORE THE NATIONAL POLLS -- they mean nothing. We do not have a national election. We have fifty state elections. The winner of the electoral college wins the Presidency. Obama will easily reach 270 electoral college votes. If he doesn't, it will be blatantly obvious the GOP stole the election. I think it would be too obvious, thus they won't try.
Collapse